What’s the Deal With Speaking in Tongues? 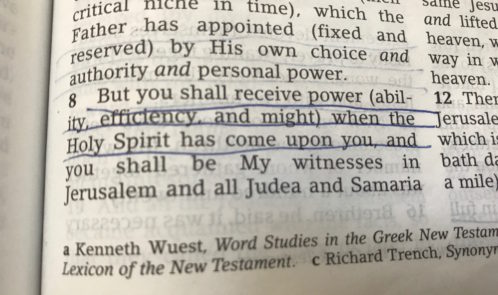 This subject is probably one of the most controversial areas of Scripture. It is always best to see what the Bible has to say about any subject. Jesus had been crucified and had risen on the third day. He had shown Himself to more than five hundred people for the forty days since His resurrection day. He knew He was leaving to be with His Heavenly Father and before He left, He gave some special instructions to His disciples. “And while being in their company and eating with them, He commanded them not to leave Jerusalem but to wait for what the Father had promised, of which (He said) you have heard Me speak. For John baptized with water, but not many days from now you shall be baptized with (placed in, introduced into) the Holy Spirit” (Acts 1:4-5). He tells His disciples not to leave Jerusalem until they are baptized with the Holy Spirit. He tells them this was not like when John baptized with water—this was something different. He goes on to explain, “But you shall receive power (ability, efficiency, and might) when the Holy Spirit has come upon you, and you shall be my witnesses in Jerusalem and all Judea and Samaria and to the ends (the very bounds) of the earth” (Acts 1:8).

Okay, so now they know that somehow through receiving the Holy Spirit, they will receive power. They needed some power and boldness. Just forty days before, every one of them had run in fear and left their friend, Jesus, to face crucifixion alone. After Jesus spoke these last words to them, He was taken up to Heaven. “And when He had said this, even as they were looking (at Him), He was caught up, and a cloud received and carried Him away out of their sight” (Acts 1:9).

So the disciples went back to Jerusalem as He had instructed them. They hid out in an upper room and prayed and waited. Peter preached to them a bit, they chose a new disciple to replace Judas Iscariot, and they waited and waited.

Suddenly on the day of Pentecost, they heard something. “And when the day of Pentecost had fully come, they were all assembled together in one place, when suddenly there came a sound from heaven like the rushing of a violent tempest blast, and it filled the whole house in which they were sitting” (Acts 2:1-2). The sound was like the sound of a loud tempest blowing. These people did not have much to compare a loud noise to. They could not say “It sounded like a jet engine” or “It sounded like a runaway locomotive”. However it was described, it certainly must have gotten everyone’s attention.

“And there appeared to them tongues resembling fire, which were separated and distributed and which settled on each one of them. And they were all filled (diffused throughout their souls) with the Holy Spirit and began to speak in other (different, foreign) languages (tongues), as the Spirit kept giving them clear and loud expression (in each tongue in appropriate words)” (Acts 2:3-4). Now the disciples are all speaking words from languages that they have never learned or have never known. Suddenly they no longer feel compelled to hide out in the upper room. They spill out onto the streets, and people from all over hear these disciples speaking all these different languages. “And when this sound was heard, the multitude came together and they were astonished and bewildered, because each one heard them (the apostles) speaking in his own (particular) dialect. And they were beside themselves with amazement, saying, Are not all these who are talking Galileans? Then how is it that we hear, each of us, in our own (particular) dialect to which we were born? Parthians and Medes and Elamites and inhabitants of Mesopotamia, Judea and Cappadocia, Pontus and (the province of) Asia, Phrygia and Pamphylia, Egypt and the parts of Libya about Cyrene, and the transient residents from Rome, both Jews and the proselytes (to Judaism from other religions), Cretans and Arabians too- we all hear them speaking in our own native tongues (and telling of) the mighty works of God! And all were beside themselves with amazement and were puzzled and bewildered, saying one to another, What can this mean? But others made a joke of it and derisively said, They are simply drunk and full of sweet (intoxicating) wine” (Acts 2:6-13).

So now they think the disciples are babbling away in all these different languages because they are drunk. However, I have never heard that a drunk person miraculously received the ability to speak in a language he did not know. Peter who, before this happened, was so cowardly that he had denied Jesus three times, now stands boldly up in front of the very people who crucified Jesus and preaches at them. What????? Why this tremendous change in Peter?

Peter tells the crowds the disciples are not drunk- it’s only nine in the morning. He goes on to preach to them of Jesus and how because of them- the lawless and wicked men- He was crucified. You talk about courage!!! He continues to talk about their sin and about their need for repentance and because of the boldness he showed, three thousand souls accepted his message that day and were baptized.

So back to our original questions. Is speaking in tongues an actual thing? Definitely. I’ve experienced it myself. Definitely real!!!

How do you do it? You pray and ask God to give you your prayer language. Then you praise God out loud- just saying words of praise and thanks to Him and suddenly you will realize that you aren’t speaking English anymore (if that is your first language). You don’t know what the words are that are coming from your own lips, but you know how powerful they are.

What is the purpose of speaking in tongues? It’s to empower you- to give you boldness and courage to go out and share the Gospel with others. It’s also to build yourself up and in a public setting, it could be to give a group like the church information or encouragement, if an interpretation of the tongue is given as well.

Is it from God? Speaking in tongues is definitely a supernatural thing that can only come from Almighty God.

Who is it for? Paul tells us in I Corinthians 14:5 “Now I wish that you might all speak in (unknown) tongues”. Obviously, it is for everyone who is born again.

Speaking in tongues is something that every believer needs to seek. God has given this great power to His children so that we can live lives that are effective and strong in every way.