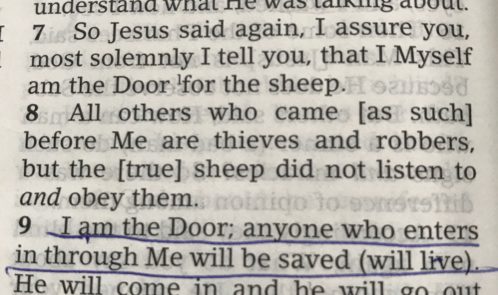 When Moses was leading the Israelites out of bondage in Egypt, God led them through some nasty places. The people were wandering through a desert so dry that to date, it only gets a half inch of rain every ten years. Instead of trusting God to bring them water, the people turned on their leader and complained. Sound familiar? “Now there was no water for the congregation, and they assembled together against Moses and Aaron. And the people contended with Moses, and said, Would that we had died when our brethren died (in the plague) before the Lord! And why have you made us come up out of Egypt to bring us into this evil place? It is no place of grain or of figs or of vines or of pomegranates. And there is not water to drink. Then Moses and Aaron went from the presence of the assembly to the door of the Tent of Meeting and fell on their faces. Then the glory of the Lord appeared to them. And the Lord said to Moses, Take the rod, and assemble the congregation, you and Aaron your brother, and tell the rock before their eyes to give forth its water, and you shall bring forth to them water out of the rock; so you shall give the congregation and their livestock drink” (Numbers 20:2-8).

Now Moses has been told to “speak” to the rock. Why did God want Moses to speak to have something miraculous happen? Here was a chance for God to teach the entire nation of Israel the importance of using their words to get their needs met. God wanted them to know the miraculous authority their words held. Moses, however, was so upset with the complaining people he was required to lead. “So Moses took the rod from before the Lord, as He commanded him. And Moses and Aaron assembled the congregation before the rock and Moses said to them, Hear now, you rebels; must we bring you water out of this rock? And Moses lifted up his hand and with his rod he smote the rock twice. And the water came out abundantly, and the congregation drank, and their livestock” (Numbers 20:9-11). Now water has been supplied to the nation of Israel, but God was not impressed with the disobedience of Moses. “And the Lord said to Moses and Aaron, Because you did not believe in (rely on, cling to) Me to sanctify Me in the eyes of the Israelites, you therefore shall not bring this congregation into the land which I have given them” (Numbers 20:12).

There is a rock in Egypt. It is five stories high and is situated at a very high place. The interesting thing about this rock is that it is split from the top to about two thirds of the way down. Another interesting thing is that all the rocks down in front of this rock are smooth. This smoothing of these rocks can only occur because of a constant great rush of water. Now remember, this is in an area that gets one half inch of rain every ten years. Yet the evidence is plain that at one time, a large amount of water flowed down the slopes coming right from the large split rock.

Look up the pictures of this rock on Bible Archeology. Bible evidence is all there. The world does not want you to know about this evidence. The world tries to hide Bible facts to keep the blinders over people’s eyes and ears, but when you search, you find God’s Word to be exactly true.

There is a mountain in Egypt. In Bible times, God called Moses to the top of a mountain, and the incredible power of God burned on top of that mountain. “And the Lord said to Moses, Go and sanctify the people (set them apart for God) today and tomorrow, and let them wash their clothes. And be ready by the third day, for the third day the Lord will come down upon Mount Sinai (in the cloud) in the sight of all the people. And you shall set bounds for the people round about, saying, Take heed that you go not up into the mountain or touch the border of it. Whoever touches the mountain shall surely be put to death. No hand shall touch it (or the offender), but he shall surely be stoned or shot (with arrows); whether beast or man, he shall not live. When the trumpet sounds a long blast, they shall come up to the mountain. So Moses went down from the mountain to the people and sanctified them (set them apart for God), and they washed their clothes. And he said to the people, Be ready by the day after tomorrow; do not go near a woman. The third morning there were thunders and lightnings, and a thick cloud upon the mountain, and a very loud trumpet blast, so that all the people in the camp trembled. Then Moses brought the people from the camp to meet God, and they stood at the foot of the mountain. Mount Sinai was wrapped in smoke, for the Lord descended upon it in fire; its smoke ascended like that of a furnace, and the whole mountain quaked greatly. As the trumpet blast grew louder and louder, Moses spoke and God answered him with a voice. The Lord came down upon Mount Sinai to the top of the mountain, and the Lord called Moses to the top of the mountain, and Moses went up” (Exodus 19:10-20).

So this mountain in Egypt was “wrapped in smoke”, the “smoke ascended like that of a furnace” and “the whole mountain quaked greatly”. Archeologists have found this mountain in Egypt. It is called Mount Horeb or Mount Moses in Hebrew. Pictures have been taken of the top of Mt. Horeb. These pictures show that all the top part of this mountain has been burned. Burnt rocks were split open to see if they were lava and burnt from volcanic activity. The split rocks show that the outside of the rocks is burnt while the inside is granite. This was not anything to do with a volcanic eruption. Fire has come down on this mountaintop so strongly that the entire top of the mountain is burnt. Look up the pictures on youtube. God’s explanation is the only explanation. The evidence is all there. People simply do not want to believe it because if it’s true and God is real, they feel they are in big trouble. The truth is they are. The devil has deceived them into believing there is no God or that He doesn’t really care about them. They believe they are on their own on this earth with all their struggles and heartache. Yet the truth is God loves each one of us. It doesn’t matter what we’ve done, or how far from grace we have fallen, God is waiting to take us back into His loving arms. The choice is ours, however. We can choose to ignore God and even stand against Him all our lives. We should be in fear if that is our attitude because Hell is a very real place. Hell was created for the devil and his demons. Human beings were never meant to go there, but unfortunately, many will not make the decision to follow Jesus in time. Don’t waste your life following the devil’s plan for your life. He is out to destroy all that he can. “The thief comes only in order to steal and kill and destroy. I came that they may have and enjoy life, and have it in abundance (to the full, till it overflows)” (John 10:10).

The Bible is true. Archeological evidence continues to show uncovered truth after uncovered truth. If archeological evidence is true, then what God said in His Word is also true, and He speaks constantly of His great love for you. “For God so greatly loved and dearly prized the world that He (even) gave up His only begotten (unique) Son, so that whoever believes in (trusts in, clings to, relies on) Him shall not perish (come to destruction, be lost) but have eternal (everlasting) life” (John 3:16). God greatly loved. He does not want you to end up in Hell. He wants your life to be like Heaven here on earth. “For if because of one man’s trespass (lapse, offense) death reigned through that one, much more surely will those who receive (God’s) over-flowing grace (unmerited favor) and the free gift of righteousness (putting them into right standing with Himself) reign as kings in life through the one Man Jesus Christ (the Messiah, the Anointed One)” (Romans 5:17). God wants you to have an amazing life here on earth and then also be with Him in Heaven when this life is over. The most important decision you will ever make is in your hands. I pray you choose wisely.