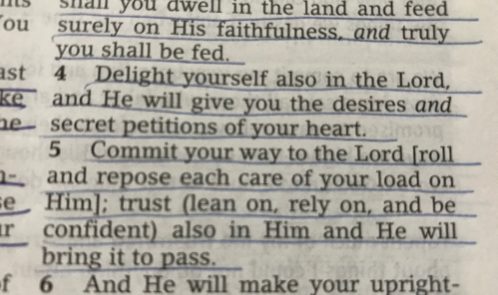 Abram was given amazing promises from God. We find one promise in Genesis 12:1-3, “Now (in Haran) the Lord said to Abram, Go for yourself (for your own advantage) away from your country, from your relatives and your father’s house, to the land that I will show you. And I will make of you a great nation, and I will bless you (with abundant increase of favors) and make your name famous and distinguished, and you will be a blessing (dispensing good to others). And I will bless those who bless you (who confer prosperity or happiness upon you) and curse him who curses or uses insolent language toward you; in you will all the families and kindred of the earth be blessed (and by you they will bless themselves).”

Abram believed God, but he did not obey to the letter what God had directed him to do. Abram did leave Haran as God said, but he took a family member, Lot, with him. “So Abram departed, as the Lord had directed him; and Lot (his nephew) went with him. Abram was seventy-five years old when he left Haran. Abram took Sarai his wife, and Lot his brother’s son, and all their possessions that they had gathered, and the persons (servants) that they had acquired in Haran, and they went forth to go to the land of Canaan” (Genesis 12:4-5).

Now because Abram disobeyed and brought Lot with him, trouble with Lot ensued. God was already blessing Abram with many herds and flocks, and fights broke out between their herdsmen as they attempted to find enough food for all the livestock. Abram asked Lot to chose a part of the land for himself so that there would be enough space for everyone (Genesis 13:7-11). God talked to Abram again, once Lot had left him. Abram was back on track now obeying God’s commands to the letter. In Genesis 13:14-17, we read more of the promises God made to bless Abram. “The Lord said to Abram after Lot had left him, Lift up now your eyes and look from the place where you are, northward and southward and eastward and westward: For all the land which you see I will give to you and to your posterity forever. And I will make your descendants like the dust of the earth, so that if a man could count the dust of the earth, then could your descendants also be counted. Arise, walk through the land, the length of it and the breadth of it, for I will give it to you.”

After Lot is captured and God gives Abram a great victory in going out and defeating Chedorlaomer and the kings who were with him, God again gives a great promise to Abram. In Genesis 15:1 we read, “After these things, the word of the Lord came to Abram in a vision, saying, Fear not, Abram, I am your Shield, your abundant compensation, and your reward shall be exceedingly great.” I’m sure Abram truly appreciated all the promises of great blessing God was bestowing on him, but something important was bothering him. “And Abram said, Lord God, what can You give me, since I am going on (from this world) childless and he who shall be the owner and heir of my house is this (steward) Eliezer of Damascus? And Abram continued, Look, You have given me no child; and (a servant) born in my house is my heir. And behold, the word of the Lord came to him, saying, This man shall not be your heir, but he who shall come from your own body shall be your heir. And He brought him outside (his tent into the starlight) and said, Look now toward the heavens and count the stars- if you are able to number them. Then He said to him, So shall your descendants be” (Genesis 15:2-5).

Now Abram must have gotten excited. He was finally going to have the child he had longed for. However, he got tired with waiting. He had now been in the new land ten years, and there was still no sign of a child. Sarai, his wife, also gets weary in waiting. She decided they should take matters into their own hands and have a child through her handmaid. Abram is only too willing to oblige, but once the handmaid, Hagar, was pregnant with Abram’s son, Ishmael, Hagar lorded it over Sarai. Sarai treated her harshly in return, and we are still seeing the fallout between these two nations in the Middle East today. All because Abram took matters into his own hands instead of patiently waiting on God’s timing.

When Abram was ninety-nine years old, God again spoke to him to encourage him that he would have a child with Sarai. God changed Abram’s name to Abraham, which means ‘father of many nations’. “Nor shall your name any longer be Abram (high, exalted father); but your name shall be Abraham (father of a multitude), for I have made you the father of many nations. And I will make you exceedingly fruitful and I will make nations of you, and kings will come from you. And I will establish My covenant between Me and you and your descendants after you throughout their generations for an everlasting, solemn pledge, to be a God to you and to your posterity after you. And I will give to you and to your posterity after you the land in which you are a stranger (going from place to place), all the land of Canaan, for an everlasting possession; and I will be their God” (Genesis 17:5-8). “And I will bless her and give you a son also by her. Yes, I will bless her, and she shall be a mother of nations; kings of peoples shall come from her” (Genesis 17:16).

Abraham had lost a lot of hope by now. “Then Abraham fell on his face and laughed and said in his heart, Shall a child be born to a man who is a hundred years old? And shall Sarah, who is ninety years old, bear a son? And (he) said to God, Oh, that Ishmael might live before You!” (Genesis 17:17-18). But God reiterates what the promise actually is. “But God said, Sarah your wife shall bear you a son indeed, and you shall call his name Isaac (laughter); and I will establish my covenant or solemn pledge with him for an everlasting covenant and with his posterity after him. And as for Ishmael, I have heard and heeded you: behold, I will bless him and will make him fruitful and will multiply him exceedingly; He will be the father of twelve princes, and I will make him a great nation. But My covenant, My promise and pledge, I will establish with Isaac, whom Sarah will bear to you at this season next year” (Genesis 17:19-21).

Finally in Genesis 21:1-5 we read of the fulfillment of God’s promise. “The Lord visited Sarah as He had said, and the Lord did for her as He had promised. For Sarah became pregnant and bore Abraham a son in his old age, at the set time God had told him. Abraham named his son whom Sarah bore to him Isaac (laughter). And Abraham circumcised his son Isaac when he was eight days old, as God had commanded him. Abraham was a hundred years old when Isaac was born.” Finally, the child arrived that Abraham had waited so long for. Just how long did he have to wait? Abraham was seventy-five when he left Haran. He was eighty-six when Ishmael was born, and he was one hundred when Isaac was born. So from the time of God’s promise for a son, he waited twenty-five years. Throughout the twenty-five years he watched his wife and himself grow older. They became too old to ever bear children, but Abraham remained steadfast in his trust in God’s ability to fulfill all His promises.

Have you been waiting on God for something to change in your life? Have you grown weary and disheartened with your waiting? Remember God knows so much more about your situations than you do. He also knows you better than you know yourself. He loves you and wants the very best life for you. I encourage you to hold fast to your patience as you wait for the goodness of God to be manifest in your life. God’s timing is a perfect timing. He is usually not early, but He is also never late.

Remember to watch what you are saying while you wait. Make sure you are not grumbling and complaining and speaking negatively about your situation. That would be like a farmer who, after planting his seed in the ground, goes out and pulls up the young plants just when they begin to sprout. There can be no harvest when that is going on. Keep your godly confession going over your situation. God will bring you all the desires of your heart as you serve Him and wait patiently on His timing. Psalm 37:4 tells us, “Delight yourself also in the Lord, and He will give you the desires and secret petitions of your heart.”