God Has a Purpose for Your Life 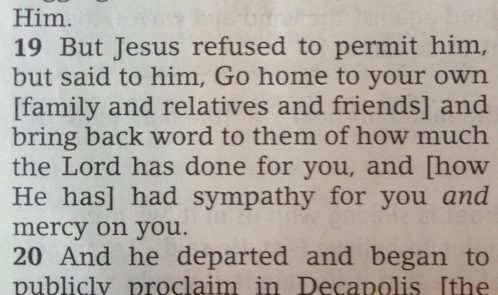 In Mark 5 we read about Jesus and His disciples crossing the sea to come to an area called the Gerasenes. Jesus had a purpose in crossing the sea and landing in this area. As soon as He lands, we see why He arrived in exactly that place. Mark 5:2 tells us, “And as soon as He got out of the boat, there met Him out of the tombs a man (under the power) of an unclean spirit.”

Now I don’t know about you, but if I knew I was going to be met by a man like this, I think I would have kept boating, and I would have chosen a different spot to dock my boat. But Jesus had a purpose. He was there for that man. He loved him, and He knew the torment the man was enduring. Mark 5:3-5 describes this torment. “This man continually lived among the tombs, and no one could subdue him any more, even with a chain. For he had been bound often with shackles for the feet and handcuffs, but the handcuffs of chains he wrenched apart, and the shackles he rubbed and ground together and broke in pieces; and no one had strength enough to restrain or tame him. Night and day among the tombs and on the mountains he was always shrieking and screaming and beating and bruising and cutting himself with stones.”

Sound like the worst life, not only for this poor man, but also for any poor soul who ventured near him. But Jesus had a purpose.

Now when Jesus landed by the shore, this man saw Him. Mark 5:6 tells us, “And when from a distance he saw Jesus, he ran and fell on his knees before Him in homage.”

This is interesting to me. Many people will not admit who Jesus is, and yet this demon-possessed man knew who this was.

Mark 5:7 continues, “And crying out with a loud voice, he said, What have You to do with me, Jesus, Son of the Most High God?

So even the demon knew who this was. Does that mean that demons are more intelligent than some people? It makes one wonder.

But Jesus had a purpose. In Mark 5:8 we find out that purpose. “For Jesus was commanding, Come out of the man, you unclean spirit!” Here is why He came all the way across the sea. He was not going to let this man live this way any longer.

In verse 9, “And He asked him, What is your name? He replied, My name is Legion, for we are many.”

Okay! Now we find out there is not just one demon attacking this man but many. Now I think I would definitely be back on the boat heading across the sea, but Jesus knew He had authority over any number of demons, and the thing that all of us need to remember is that when we have Jesus in our hearts, we have that same authority He does. So I guess I would not be heading back across the sea. I would be standing there saying the same words Jesus said, but I would be saying them “In Jesus’ Name”.

This demoniac was completely healed. When the townsfolk heard about this, they hurried out “And they came to Jesus and looked intently and searchingly at the man who had been a demoniac, sitting there, clothed and in his right mind, (the same man) who had had the legion (of demons); and they were seized with alarm and struck with fear” (v. 15).

When Jesus was about to leave in verse 18, “And when He had stepped into the boat, the man who had been controlled by the unclean spirits kept begging Him that he might be with Him.” I would have felt the same way. I would never have wanted to let Jesus out of my sight after what He had done for me.

“But Jesus refused to permit him, but said to him, Go home to your own (family and relatives and friends) and bring back word to them of how much the Lord has done for you and (how He has) had sympathy for you and mercy on you” (v. 19).

Now Jesus must have known more people who needed to hear about Him that could be touched by this man’s testimony. He had an assignment for him, and the man obeyed. “And he departed and began to publicly proclaim in Decapolis (the region of the ten cities) how much Jesus had done for him, and all the people were astonished and marvelled” (v. 20).

Jesus saw this man who seemed completely useless and pathetic. All the people considered this man beyond help, but Jesus had a purpose for his life. Do you ever feel you have no purpose? Do you feel you have messed up so badly that God could never use you? The devil might want you to think that, but he is a liar and the father of lies. God has a great purpose for your life. He loves you dearly, and He will take you in and show you all the great things He has planned for your life. I encourage you to ask Jesus into your heart and give your life over to Him. You will be ever so glad you did!