God Has a Plan! 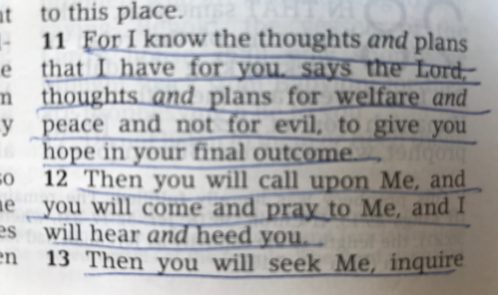 In Genesis 1:2 we read, “The earth was without form and an empty waste, and darkness was upon the face of the very great deep. The Spirit of God was moving (hovering, brooding) over the face of the waters.” Now God does not create anything that is dark or empty waste or without form. What happened to the earth for it to be in that state? Have you ever noticed that where evil abounds on this earth, life is not good and prosperity is difficult to find? When Satan rebelled against God, he was cast out from Heaven to the earth. “How have you fallen from heaven, O light-bringer and daystar, son of the morning! How you have been cut down to the ground, you who weakened and laid low the nations (O blasphemous, satanic king of Babylon!).” So we know Satan was cast out of Heaven. How do we know he was cast down to the earth? Revelations 12:9 explains, “And the huge dragon was cast down and out- that age-old serpent, who is called the Devil and Satan, he who is the seducer (deceiver) of all humanity the world over; he was forced out and down to the earth, and his angels were flung out along with him.”

Where ever Satan is in control, things go downhill quickly. There is nothing left that is beautiful or lovely. Thus, once Satan was cast down to the earth, now we have an earth “without form” and “an empty waste”. This is what happens in our lives when we let Satan rule. Proverbs 13:13-15 tells us, “Whoever despises the word and counsel (of God) brings destruction upon himself, but he who (reverently) fears and respects the commandment (of God) is rewarded. The teaching of the wise is a fountain of life, that one may avoid the snares of death. Good understanding wins favor, but the way of the transgressor is hard (like the barren, dry soil or the impassable swamp).”

I encourage you to read over Deuteronomy 28. This chapter lists all the wonderful blessings that are ours through God’s grace, but it also goes on to list the curses that come upon those who “will not obey the voice of the Lord your God!” (Deuteronomy 28:15). Psalm 91 is another great chapter in the Bible that lists all the wonderful blessings that accompany God’s children. “He who dwells in the secret place of the Most High shall remain stable and fixed under the shadow of the Almighty (Whose power no foe can withstand)” (Psalm 91:1) or “A thousand may fall at your side and ten thousand at your right hand, but it shall not come near you. Only a spectator shall you be (yourself inaccessible in the secret place of the Most High) as you witness the reward of the wicked. Because you have made the Most High your refuge, and the Most High your dwelling place, there shall no evil befall you, nor any plague or calamity come near your tent. For He will give His angels (especial) charge over you to accompany and defend and preserve you in all your ways (of obedience and service). They shall bear you up on their hands, lest you dash your foot against a stone. You shall tread upon the lion and adder; the young lion and the serpent shall you trample underfoot because he has set his love upon Me, therefore will I deliver him; I will set him on high, because he knows and understands My name (has a personal knowledge of My mercy, love, and kindness—trusts and relies on Me, knowing I will never forsake him, no, never). He shall call upon Me, and I will answer him; I will be with him in trouble, I will deliver him and honor him. With long life will I satisfy him and show him My salvation” (Psalm 91: 7-16). So this is how life can be as we put our trust in God.

God has always had a plan for each one of us, and that plan includes bringing the Garden of Eden into our lives in every way. That was His plan from the beginning, and that plan has never changed. The plan was waylaid but not changed. God wanted Adam to be in authority on the earth. God wanted Adam to rule the earth with the same authority He had in Heaven. Adam was to guard the garden. “And the Lord God took the man and put him in the Garden of Eden to tend and guard and keep it” (Genesis 2:15). What was Adam to “guard” the garden from? There was only one enemy- Lucifer/Satan.

Adam alone has been taught by God how to take his authority and keep his authority away from God’s only enemy. Did Adam do what he was trained up and required by God to do? When Satan tempted Eve with the fruit of the Tree of the Knowledge of Good and Evil, she did a great wrong. However, she was not the one who had been trained up in how to use her authority to defeat the enemy. Adam was the one who was ready for battle. Why do you think Satan chose Eve instead of trying to tempt Adam?

When Eve was tempted by Satan, where was Adam? Was he a far ways off at the other end of the garden? No, he was right there with her. “When the woman saw that the fruit of the tree was good for food and pleasing to the eye, and also desirable for gaining wisdom, she took some and ate it. She also gave some to her husband, who was with her, and he ate it “ (Genesis 3:6). Adam was standing there with her, knowing how to use his authority. He had been trained up by God Himself to do battle with the enemy. He should have knocked that fruit out of Eve’s hands and said, “Now repent, and God will forgive you because you were deceived.” Then he should have turned to that evil serpent and said, “You get away from us. I take the authority given to me by Almighty God, and I cast you out from this place.”

Unfortunately, this is not what happened. So now Adam has given up the authority God gave him. Now Satan has taken that earthly authority as his own. God, however, has never turned back from His original plan to give man back the authority for the earth. The minute this all happened, God had a plan. “And I will put enmity between you and the woman, and between your offspring and her Offspring; He will bruise and tread your head underfoot, and you will lie in wait and bruise His heel” (Genesis 3:15). God has already got a plan in place for Jesus to solve this problem. God has a way for man to get his authority back through Jesus.

God wants us living in our own Garden of Eden. He wants us to be ruling and reigning on the earth. He has prepared a way for this to come to pass. His plan for each of us is a glorious plan: “For I know the thoughts and plans that I have for you, says the Lord, thoughts and plans for welfare and peace and not for evil, to give you hope in your final outcome” (Jeremiah 29:11).