Can You Be Forgiven? 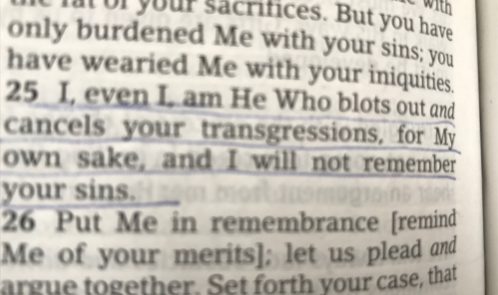 In Bible times, Saul was a religious man who wholeheartedly believed that if he killed off followers of Jesus, he was actually doing the will of God. In Acts 7:58 we read of Saul holding the garments for the people who were stoning Stephen. “Then they dragged him (Stephen) out of the city and began to stone him, and the witnesses placed their garments at the feet of a young man named Saul.” Acts 8:1-4 continues the story of Saul’s reign of terror towards Christians. “And Saul was (not only) consenting to (Stephen’s) death (he was pleased and entirely approving). On that day a great and severe persecution broke out against the church which was in Jerusalem; and they were all scattered throughout the regions of Judea and Samaria, except the apostles (special messengers). (A party of) devout men with others helped to carry out and bury Stephen and made great lamentation over him. But Saul shamefully treated and laid waste the church continuously (with cruelty and violence); and entering house after house, he dragged out men and women and committed them to prison. Now those who were scattered abroad went about (through the land from place to place) preaching the glad tidings, the Word (the doctrine concerning the attainment through Christ of salvation in the kingdom of God).” God’s people had to scatter abroad to try to find a safe place away from Saul’s tyranny. In Acts 9:1-2, Saul continues his evil ways. “Meanwhile Saul, still drawing his breath hard from threatening and murderous desire against the disciples of the Lord, went to the high priest. And requested of him letters to the synagogues at Damascus (authorizing him), so that if he found any men or women belonging to the Way (of life as determined by faith in Jesus Christ), he might bring them bound (with chains) to Jerusalem.”

The issue here is that God knew Saul’s heart. He knew Saul was doing what he incorrectly believed was right. He knew what a great man of God Saul could become. God loves us as we are, but sees us as we could be. Sometimes God reveals our sin to us in a huge way. He knows it will hurt us, but He cannot have His beloved children continue to destroy themselves and others around them. He must wake us up.

God woke Saul up in a huge way. In Acts 9:3-9, we read how God got Saul’s attention as he continued in his sin. “Now as he traveled on, he came near to Damascus, and suddenly a light from heaven flashed around him. And he fell to the ground. Then he heard a voice saying to him, Saul, Saul, why are you persecuting Me (harassing, troubling, and molesting Me)? And Saul said, Who are You, Lord? And He said, I am Jesus, Whom you are persecuting. It is dangerous and it will turn out badly for you to keep kicking against the goad (to offer vain and perilous resistance). Trembling and astonished he asked, Lord, what do You desire me to do? The Lord said to him, But arise and go into the city, and you will be told what you must do. The men who were accompanying him were unable to speak (for terror), hearing the voice but seeing no one. Then Saul got up from the ground, but though his eyes were opened, he could see nothing; so they led him by the hand and brought him into Damascus. And he was unable to see for three days, and he neither ate nor drank (anything).” Now Saul is blind, helpless, and dependant on the kindness of the people around him to get him to town. Oftentimes sin leads us to a dark place like this.

God often gives a job to those who love Him- to those whom He can trust. Such a man was Ananias. “Now there was in Damascus a disciple named Ananias. The Lord said to him in a vision, Ananias. And he answered, Here am I, Lord. And the Lord said to him, Get up and go to the street called Straight and ask at the house of Judas for a man of Tarsus named Saul, for behold, he is praying (there). And he has seen in a vision a man named Ananias enter and lay his hands on him so that he might regain his sight” (Acts 9:10-12).

Have you ever sinned against someone and you know they no longer trusted you or your word? When Ananias heard he was to go lay hands on a murderous man like Saul, he was not impressed. “But Ananias answered, Lord, I have heard many people tell about this man, especially how much evil and what great suffering he has brought on Your saints at Jerusalem; Now he is here and has authority from the high priests to put in chains all who call upon Your name” (Acts 9:13-14). God assured Ananias that Saul had changed. “But the Lord said to him, Go, for this man is a chosen instrument of Mine to bear My name before the Gentiles and kings and the descendants of Israel” (Acts 9:15). Somehow Ananias gathered his courage. He definitely did not trust Saul, but he did trust God. “So Ananias left and went into the house. And he laid his hands on Saul and said, Brother Saul, the Lord Jesus, Who appeared to you along the way by which you came here, has sent me that you may recover your sight and be filled with the Holy Spirit. And instantly something like scales fell from (Saul’s) eyes, and he recovered his sight. Then he arose and was baptized” (Acts 9: 17-18).

Now Saul has changed in a huge way. He has repented of his horrible sins and has become a new creation, but is he trusted? Trust is a tough thing to win back once it’s been lost. Saul realized the difficulty he was having with people trusting him, so he left and studied and learned more from God for three years before he attempted to enter Jerusalem. “Nor did I (even) go up to Jerusalem to those who were apostles (special messengers of Christ) before I was, but I went away and retired into Arabia, and afterward I came back again to Damascus. Then three years later, I did go up to Jerusalem to become (personally) acquainted with Cephas (Peter), and remained with him for fifteen days. But I did not see any of the other apostles except James the brother of our Lord” (Galatians 1:17-19). “Then I went into the districts (countries, regions) of Syria and Cilicia. And so far I was still unknown by sight to the churches of Christ in Judea (the country surrounding Jerusalem). They were only hearing it said, He who used to persecute us is now proclaiming the very faith he once reviled and which he set out to ruin and tried with all his might to destroy” (Galatians 1:21-23).

Yet still as Saul entered Jerusalem, he was not well received. People remembered his sin and did not believe him. “And when he had arrived in Jerusalem, he tried to associate himself with the disciples; but they were all afraid of him, for they did not believe he really was a disciple” (Acts 9:26). Thankfully, Barnabas saw and believed in and trusted who Saul had become. On Barnabas’ word, Saul was finally accepted and trusted. “However, Barnabas took him and brought him to the apostles, and he explained to them how along the way he had seen the Lord, Who spoke to him, and how at Damascus he had preached freely and confidently and courageously in the name of Jesus. So he went in and out (as one) among them at Jerusalem. Preaching freely and confidently and boldly in the name of the Lord” (Acts 9:27-29A).

It took Saul (who later became Paul) three years to try to win trust after it had been so severely broken because of his sins. Yet even though his sins were so heinous, God still forgave him when he truly repented and wholeheartedly changed his ways. God gave him great assignments, and Paul became one of the most prolific writers of the New Testament. Look what God can do with a horrible sinner who becomes a new creation in Christ Jesus! The wonderful thing is that God will do this same restoration in any soul who is truly repentant for their sins and honestly desires to be made clean in Him. I John 1:9 tells us, “If we (freely) admit that we have sinned and confess our sins, He is faithful and just (true to His own nature and promises) and will forgive our sins (dismiss our lawlessness) and (continuously) cleanse us from all unrighteousness (everything not in conformity to His will in purpose, thought, and action).” Isaiah 43:25 shows us that God doesn’t even remember our sins once we have truly repented of them. “I, even I, am He Who blots out and cancels your transgressions, for my own sake, and I will not remember your sins.”

We can have a fresh start without the weight of our sins, but only if we are truly sorry for what we have done. God has given even the most heinous sinners a way out!